LARCs Across the Pond: IUD Trends in Europe

LARCs Across the Pond: IUD Trends in Europe

LARCs[1] (long-acting reversible contraceptives) are proven to be the most effective reversible means of preventing pregnancy. Why, then, are LARC usage statistics not uniformly higher worldwide?  A closer look at the trends in Europe, as well as comparisons to VirtaMed World’s previous analysis of the situation in the United States, offer some answers to this question.

The most recent issue of VirtaMed World featured an article which drew two very interesting conclusions about the use of LARCs in the United States. The first was that the United States’ two-visit protocol for LARCs has reduced the usagerates of these highly effective forms of birth control. The second is that simulation training has been used to reduce the need for a two-visit protocol and thus increased the rates of LARC use. The expectation is that as LARCs increase as the preferred method of contraception, the number of unwanted pregnancies, particularly among teenagers, will correspondingly decrease.

In the same way initiatives in the United States have turned to simulation training to address impediments to the uptake of LARCs and thus increase patient usage rates, so could health care providers (HCPs) in Europe utilize simulation as a training and educational tool to encourage increased adoption of IUDs. This article will look specifically at statistics and protocols in Europe as they pertain to IUDs, and what obstacles impede more widespread uptake of this effective means of birth control.

The study, ‘Assessment of a high-fidelity mobile simulator for intrauterine contraception training in ambulatory reproductive health centres’ published in the Journal of European Continuing Medical Education (CME), demonstrated “benefits from using a high-fidelity mobile simulator to teach IUD insertion to clinicians in geographically dispersed ambulatory health care settings. The participants, many of whom had prior experience with IUD provision, reported increased competency and comfort with IUD insertion after training on the [VirtaMed] PelvicSim.”

Participants in this study found the training so helpful, in fact, that, “All participants would recommend the PelvicSim for IUD training, and nearly all (97.2%) reported that the PelvicSim was a better method to teach IUD insertion than the simple plastic models supplied by IUD manufacturers.”

The Guttmacher’s Institute’s ‘Popular Disparity: Attitudes About the IUD in Europe and the United States’ notes that IUDs are widely popular outside of the US, and that this “is the case not only in the developing world, but in European countries that in many ways are similar to the United States.”

However, the United Nations’ 2018 World Contraceptive Report cites IUD usage in the United States as of 2015 at 10%, compared to Statista’s 2016 data for IUD usage in Europe at 11%. This is not such a wide margin at all.

As evidenced in the United Nations’ 2018 World Contraceptive Report, IUD usage varies widely within Europe, today and over the past forty-plus years, country to country and within countries as well. Unlike the United States, which has shown a steady growth in IUD adoption in the last twenty years, many European countries display the opposite trend.[2] 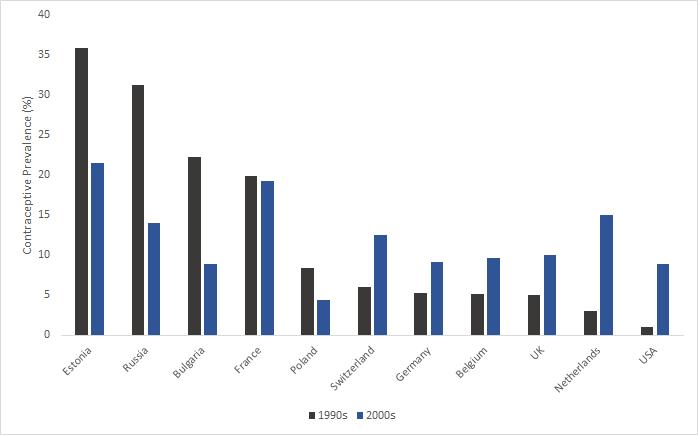 Where Estonia showed a rate of 36% IUD usage in 1994, that number was down to 22% by 2004. Though Germany almost doubled its rate between 1992 and 2008 and is today comparable to the USA, the contemporary rate of 9% still trails the IUD prevalence of the mid-eighties there, when 15% of women of reproductive age were using IUDs. Belgium and the UK also rank most closely with the United States’ rate of about 10% IUD use.[3]

While myriad factors and obstacles influence a patient’s likelihood to choose an IUD and a provider’s likelihood to recommend them[4], including cost[5], many countries’ HCPs are united by a range of anxieties surrounding insertion of and side-effects resulting from IUDs.

‘Understanding the barriers and myths limiting the use of intrauterine contraception in nulliparous women’, co-authored by KJ Buhling for the European Journal of Obstetrics and Gynecology, found, for example, that HCPs in Sweden reported concerns about IUCs[1]disrupting normal menstruation and causing pain during insertion. The patient’s comfort during insertion was similarly a concern in Turkey, The Netherlands, UK, Ireland. The latter three countries, along with Russia, also had concerns that nulliparous women (women who have not given birth) are not good candidates for IUCs. This represented a barrier, along with cost, for HCPs in Germany. HCPs in France, Turkey, and Russia were also troubled by the idea that IUCs increase the likelihood of women contracting pelvic inflammatory disease (PID).

Other cited barriers include higher risk of infertility, elevated risk for ectopic pregnancy, as well as specific difficulties for nulliparous women such as an increased risk of uterine perforation and expulsion of the IUD. However, many of the perceived risks are not substantiated and the article goes on to disprove and negate these concerns, particularly as they pertain to the ineligibility of nulliparous women and the increased risk of PID.

If reservations about IUDs exist among health care providers across Europe, it follows that patients would also be subject to persistent myths and misunderstandings around this most effective form of contraception.

From ‘Assessment of a high-fidelity mobile simulator for intrauterine contraception training in ambulatory reproductive health centres’:

“Despite the high level of perceived competency before training, the self-reported comfort level after training increased for all tasks, with more than half of respondents feeling slightly or much more comfortable with uterine sounding, understanding the steps of IUD placement, IUD insertion on a live patient, [and] minimizing pain on a live patient.”

Though the obstacles to increased IUD uptake across Europe vary widely, simulation training shows great promise as a means of mitigating practitioner and, in turn, patient concerns over pain from or difficulty of IUD insertion, side effects or complications from IUD usage, and persistent misconceptions about patient eligibility for this superior means of reversible and effective contraception.

We invite you to stay tuned to future VirtaMed World newsletters for rest-of-world trends in gynecology and the benefits of simulation training.

[2] Data suggests that countries with high IUD utilization under communist regimes in the 90s have rapidly decreased their use of IUDs, whereas those with relatively low usage in the 90s have roughly doubled in the 2000s.

[3] France’s rate of IUD usage has, on the surface, held steady over time. Nevertheless, ‘IUD use in France: women's and physician's perspectives’ posits that, “the considerable age discrepancy in IUD use in France, with very few young women most at risk of an unintended pregnancy using the method, reflects a knowledge gap shared by users and providers. These findings suggest there are significant opportunities to improve contraceptive care in France.”

[4] Buhling, et al.’s  ‘Worldwide use of intrauterine contraception: A review’ for Contraception  notes that which practitioners (gynecologists, general practitioner, family physicians) can perform IUD insertion has a distinct impact upon patient usage statistics. In Germany, only obstetrician-gynecologists (OB-GYNs) may provide IUC services to patients. Patients in The Netherlands, however, can visit a general practitioner or family physician for their IUC needs.

[5] The Contraception study cites, “Differences in the range of IUC options may affect access for numerous reasons. However, the most obvious factor that influences access is cost.”The National Health Service in the UK fully subsidizes all T-framed, U-framed, and frameless copper devices as well as Levonorgestrel Intrauterine Systems (LNG IUS).

In the USA, cost is dependent upon insurance plan and could range anywhere from free of cost to the patient to over $800 up front.

For comparison, in Sweden women can have a copper IUD free of charge but must pay for the LNG IUS.

Keep In Touch With Us