Kuopio University Hospital (KUS) Microsurgery Center is the only place in Finland where a doctor can practice rotator cuff repair with a simulator. The new ArthroS™ Shoulder simulator was introduced for training in October.

Many forms of shoulder pain today can be treated without surgery, yet still there are situations where a surgery is indicated. These include large traumatic tears in the rotator cuff from trauma or in other shoulder structures. In Finland, around 200 arthroscopic shoulder surgeries are performed per hundred thousand people every year.

"The VirtaMed ArthroS™ Shoulder simulator was acquired because training is also needed for these orthopedic procedures. The number of shoulder surgeries performed in Finland during the specialization phase of physicians has substantially decreased during last decade. The simulator provides a safe and fast-paced way to acquire the necessary arthroscopic skills," says Joonas Sirola, KUH's Chief Physician in Orthopedics and Traumatology. 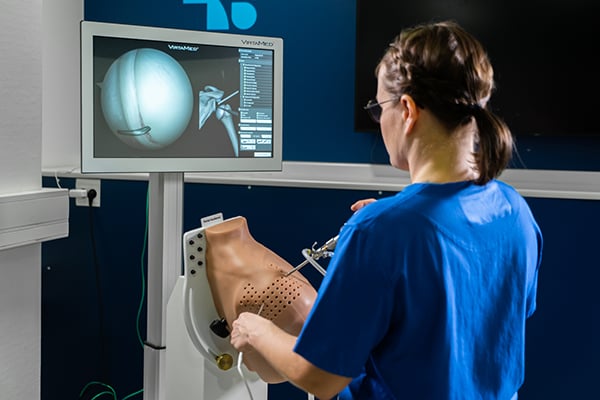 Specialist Katriina Paasikallio was one of the first to use the new VirtaMed ArthroS™ Shoulder simulator.

The shoulder of the simulator feels and looks very real. Inside the outer rubber model is an anatomical replica that corresponds to the structures of the human shoulder. Like this, the doctor feels if he touches any structure while doing the arthroscopic procedure.

The view inside the shoulder is virtual. It is generated according to the movements of the arthroscopic instruments with magnetic tracking.

"During the acquisition phase, we were able to evaluate several simulators on the market. This one was the most advanced in terms of usability and VR technology," Sirola describes.

Just over a year ago, the microsurgery center purchased the simulator with the knee model for, which was the first in Finland. The shoulder model was then also added to the simulator this fall. It contains the Swiss manufacturer's first-ever rotary cuff repair simulation, which was the only one of its kind delivered in Finland and purchased in the world to a hospital.

Chief Physician Joonas Sirola says that there is a great need for training on the simulator.

The simulator is being used by both specialist orthopedic surgeons and doctors who are in their specialization phase in orthopedic surgery at KUH. Residents from the main hospitals across Finland will also participate in the shoulder course to be held at KYS in January 2022.

"KUH has the will to train orthopedic surgeons all over Finland in arthroscopic skills. The University of Eastern Finland also plays a significant role in providing resident training," says Sirola.

According to Sirola, there is a great need for simulation training. "Physicians specializing in orthopedics have very little access to performing or practicing arthroscopy during patient care. However, it is quite critical during the training to practice these skills needed at work with real patients as well. In the future, we need top experts in shoulder surgery. Simulation technology has opened new doors for practicing these skills."

This article was originally published in Finnish here: https://www.psshp.fi/-/maailman-ensimmainen-kiertajakalvosimen-korjaussimulaatio-kysiin

To learn more about VirtaMed's simulators in Finland, contact:

Keep In Touch With Us